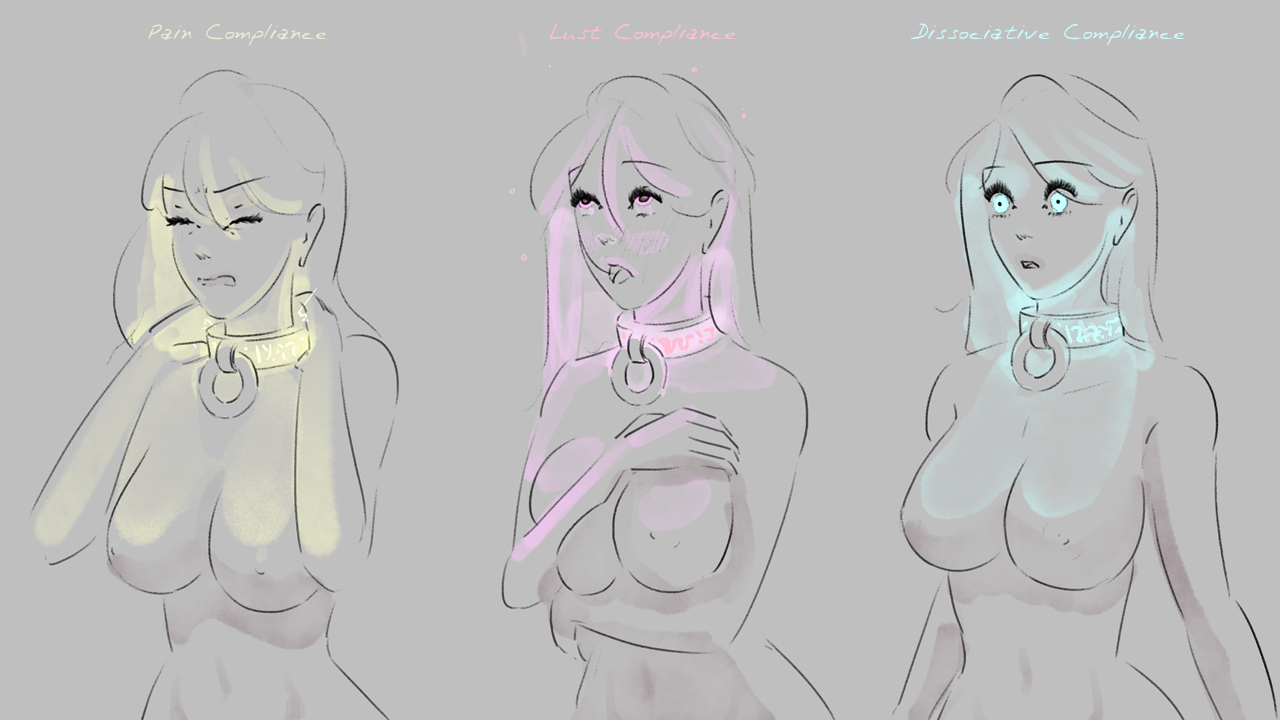 Some collar lore, by request:

Wearing a collar is a sign of devotion or subservience - to a cause or person.

As with almost any item, enchantments can be applied to these collars. They are particularly effective because of their placement on the body. The neck is vulnerable both physically and psychologically, and if the collar is made non-removable this further enhances the effect. In this world magic follows rules but it is still effected by the will of the user and a collar tends to force the issue. With the right tuning one can be made to turn almost anyone to almost any purpose. Side note: The Dagger of Xian (from Tomb Raider 2?) which grants the power of the dragon to wielder if they plunge it into their own heart, would not be out of place in this universe. It grants ultimate power but requires ultimate devotion.

Collars can come in a variety of shapes and sizes, mainly as a fashion statement. A smaller collar requires more skill and higher grade materials to hold an enchantment, making them more expensive and a bit of a status symbol.

The standard enchantment that Alison wears (pregnancy prevention) is a common matter of practicality, but more advanced enchantments are available - ranging from compliance, to mood altering, to physical changes, to very specific soul compatibility. A set could be tuned to the soul of a specific demon, acting as an extension of its will and desires, reaching out into the wider world and, eventually, to the chosen wearer (see illustration)

Magical effects are visible, by their nature. Enchanted items will glow when operating and a more intense glow generally indicates a more potent effect. When a powerful or specifically tuned item is activated, symbols may become visible on its surface. Different colors indicate different effects, but are many different approaches even within a given class of effects, so color alone is not a reliable diagnostic. A person under the influence of magic (either internally or externally) may glow visibly, particularly through the eyes.

High Res
Comments
BMO 2021-06-24 18:26:43★
Warning - Side effects of dissociation include:
1) out-of-body experience
2) feeling like you're a different person
3) feeling little to no pain
^ 2021-06-24 19:25:29
That one's my favorite
Luckarusky 2021-06-24 21:59:52
Dissociation strikes me as the most "forced" compliance. And with such an override comes stupidity. It's basically striping away the person who was there and replacing them with a dumbed-down puppet. I can only imagine that enough of that eventually starts permanently damaging the host's lucidity. There's a similar dynamic with the Reapers of Mass Effect. (The fast method will reduce the victims to a drooling vegetable within weeks. In the slower process leaves marks, but doesn't kill the mind entirely.)
LoveOfO 2021-06-24 23:40:52
Kindof reminds me of Focus Mode in Wetware. Internal monologue is muted, making the subject highly susceptible to suggestion. I'd imagine the wearer would still subconscious remember what happened, leading to submissive feelings even when the collar's inactive.
Quasispatial 2022-01-23 08:42:11
Makes me wonder how many others one could come up with. You have yellow, cyan and purple, but that still leaves green, red, brown and potentially deep blue.

To invent the others... Red, to leverage emotion. Excitement and happiness for compliance, depression and sadness for noncompliance. Green, body restrictions. Inflicts paralysis when you try to disobey, so you can only choose between obedience and inaction. Probably by interfering with nerve signals, so could still move your face. Can't think of anything off the top of my head for the other two.
Admin 2022-01-23 11:16:03
One possibility is physical compliance where the subject's body obeys but they retain control of their mind and are free to voice their objections.

You could also add in possession or "switchboard" type effects where sensations, motivations, and actions are piped around from various sources. Something like the sensation mirroring in Wetware, for example. Or the lust amplification in the presence of a particular demon, as seen in Dark Altar. A subject could dissociate while a spirit is summoned into her, either from within the collar or an external source. Varying degrees of "co-piloting" could occur.
Admin 2022-01-23 11:19:35
I've updated the image description with the info I originally posted on patreon and I'm going to repost some comments I made here for preservation.
Admin 2022-01-23 11:24:17
Q: Curious, is the anti-pregnancy enchantment the only one on Alison? I'm sure the cuffs she used to wear where a form of restraint early on. But I'd imagine they'd want a way to reel her in if necessary. Then again, she is physically weak. So outside of leveraging her purpose or some slick trickery, she's not going to get out of a fortress full of demonic soldiers. (And frankly, she's just is not clever enough to pull off such deception. Stupid? no. But not brilliant either.)

A: Alison doesn't really need to be broken, she just needs a small amount of force applied - enough for her to use as an excuse to herself. Just a little push and she'll fall right where she needs to be, and that push is best applied the old fashioned way. Anything more would be at best a waste and at worst might upset her natural proclivities.
Admin 2022-01-23 11:25:05
Q: What collars do you plan on putting on the Demonic Twins Melody takes on as her first Dominatrix assignment? I still think she's biting off more than she can chew frankly. (Which might be beneficial to some hilarity later on.) But even one as "over?" confident as Melody will want some anti-strength or magic-hindering enchantment to keep the twins from overpowering her. She's clearly mostly human after all. And the twins are succubus's who've probably got internalized magic behind them. A dangerous proposition without countermeasures.

A: Given the twins' minor shape shifting ability and demonic sex drive, any sort of lust enhancement would be counter-productive in terms of controlling them. Melody will probably elect to use a particular mix of pain and dissociation known as a command collar. When the subject is given an order in a particular commanding tone, the collar activates. If the subject does not comply they will begin to feel uncomfortable. Anxiety and guilt rise and the master's command weighs down as the most important thing in the subject's mind, like a long neglected responsibility. If they continue to resist, a mild hypnotic dissociation begins to take hold. If they continue to resust, the subject may soon find that they have carried out their mistress's orders without realizing it.

Of course this is just a insurance measure. And it's a fine line between getting what you want out of a sub and violating trust. Part of being a mistress making your sub realize they want to obey, and to make them play your games rather than fight the referee.