Poll Results
I asked patrons Which Stories Are You Most Excited For? - here are the results.
Graphs 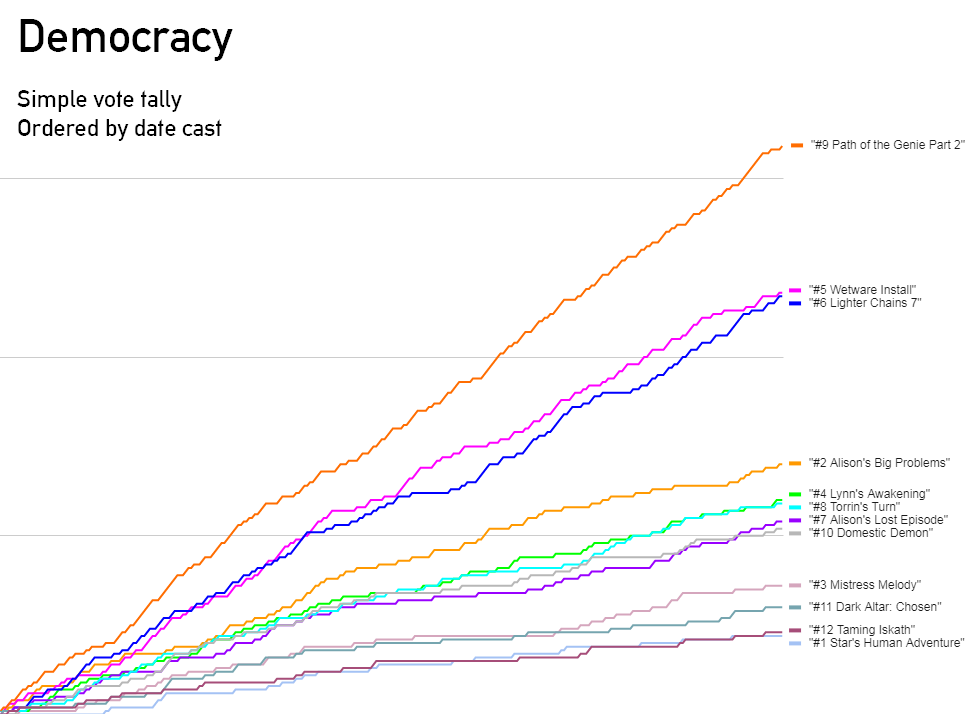 284 people cast a total of 800 votes, with Path of the Genie Part 2 being the clear winner at 56% approval. Three distinct groupings followed. 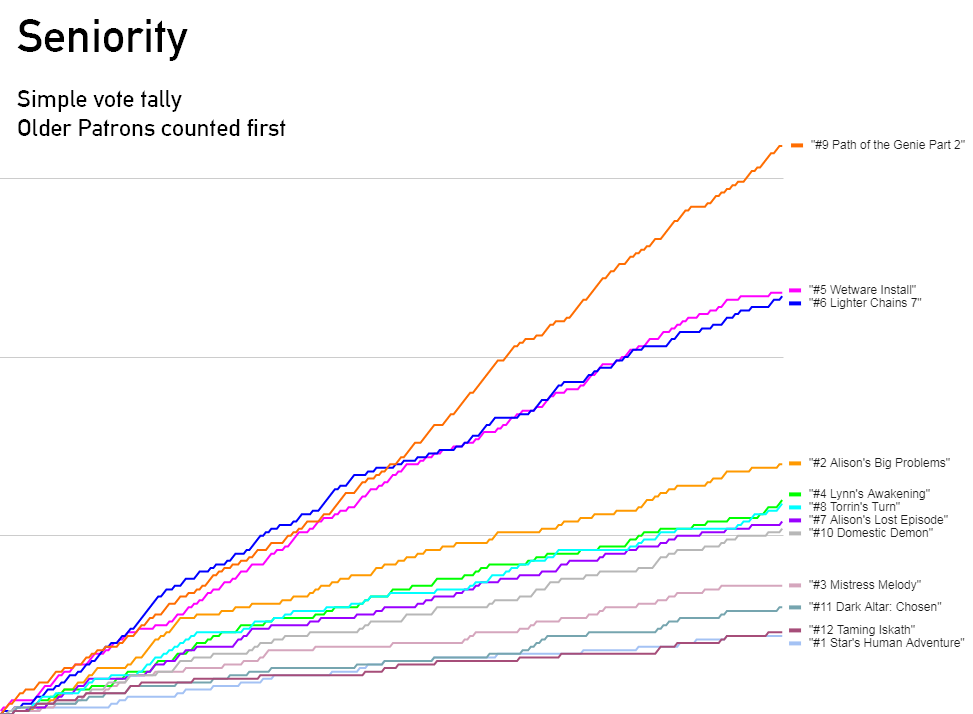 When the votes are arranged so that the oldest users (by patronage starting date) vote first, you can see a slight preference for Lighter Chains at the beginning. This makes sense as that would be the story that caused those users to join.

Here, in a fit of raw capitalism, votes are weighted by total dollars paid. PotG is still in the lead, but LC7 jumps into a solid second place, mainly due to the large influence of a few long-time members. 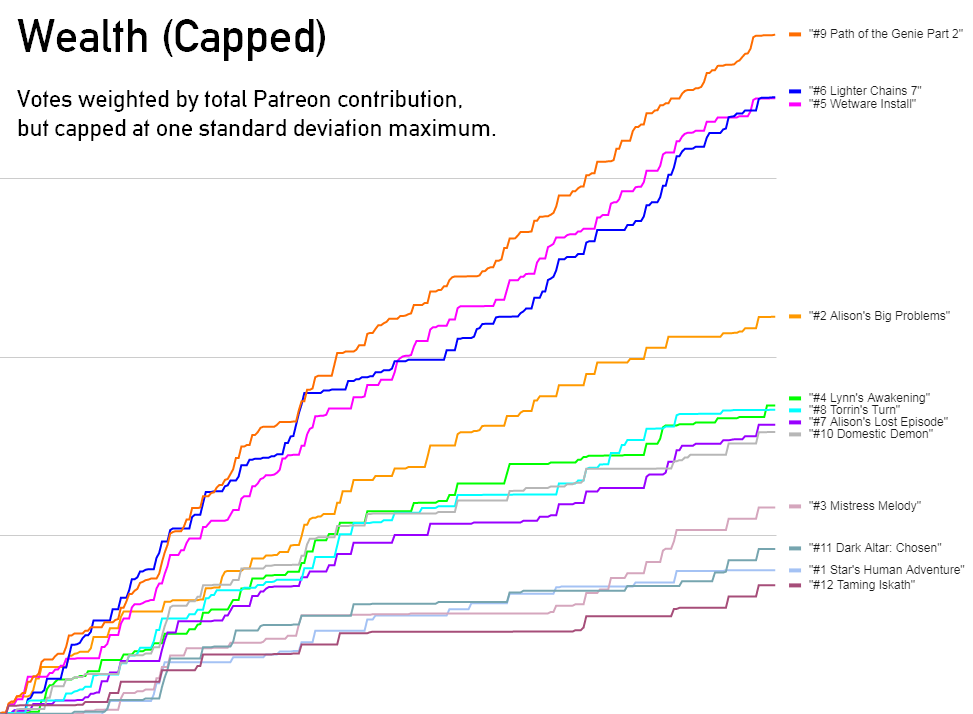 Here the dollar weighting is capped at one standard deviation above the median. Wetware and LC7 are back to a near tie for second place. 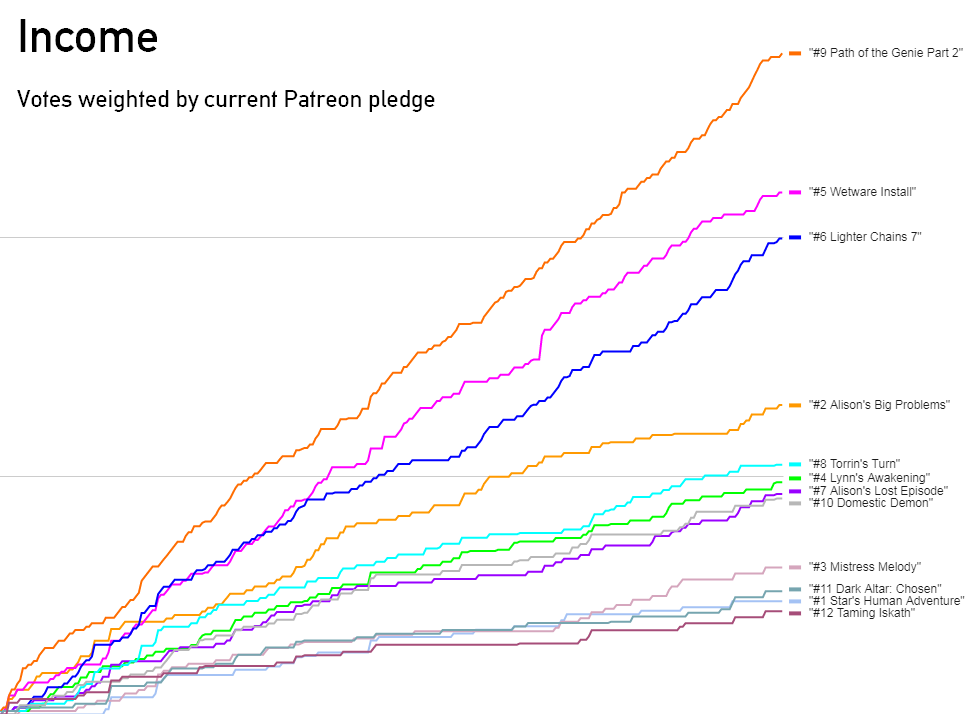 When votes are weighted by current Patreon pledge amount, Wetware pulls decidedly into second place. Torrin's turn also jumps up a spot. I have no theory for why this is. Perhaps people who like the idea of cyborg body replacement are more likely to have a 4K monitor and thus benefit from the high-res image tier.

Conclusion
Luckily, the different weighting methods don't significantly change the results. I also tried a few other manipulations on the data, such as eliminating all the people who voted for a particular title and counting the remaining ballots - the results did not change. This means approval voting generally works and there probably isn't some huge divide in the community.

If you have your heart set on one of the lower ranked stories, don't completely dispair. I am aware that there are different tiers of thing all mixed together here - we have the mainline sequels, then there are shorts and spin offs, and then there are new stories. There will naturally be fewer votes for new and unfamiliar things. So while I'll primarily be working on the popular stuff, there may be a snippet or two of other things to make them more familiar.

Working on writing and blocking for Path of the Genie Part 2 now!

[EDIT]
Comments
MadMaxHeadroom 2021-11-23 01:05:01
☒   ⚑   ⛔
0 ♡
LOL anyone else feel like the community vote did their bidding? I looked at the breakdown and just thought "wow... everyone perfectly captured my conflicted and nuanced feelings... much better than my individual votes could!"